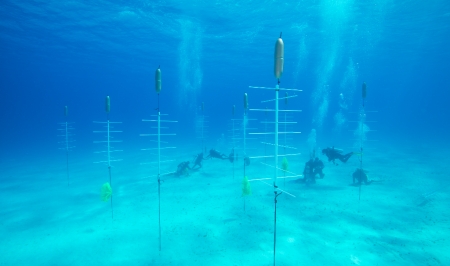 Tampa, Fla. – (April 4, 2017) After months of planning and six days in the field, an international team of 13 scientific divers from The Florida Aquarium and the National Aquarium of Cuba (NAC) has successfully constructed an underwater staghorn coral nursery in Cuba waters. This completes a second step in a long-term plan to protect and restore coral reefs in shared waters.

The nursery is in the Guanahacabibes Peninsula National Park, located just off the westernmost point of Cuba. In 1987, UNESCO designated it a Biosphere Reserve; it’s also is part of Cuba’s National System of Protected Areas (SNAP) representing 20 percent of Cuba, both on land and sea.

Because staghorn coral is a key fast-growing building block for reef ecosystems, The Florida Aquarium is studying sexual reproduction of this species as it is essential to expanding biodiversity. Enhancing genetic diversity and resiliency is needed throughout the Caribbean, Gulf of Mexico and the Atlantic Ocean.  Thus, adding NAC as a partner has amplified the reach of The Florida Aquarium’s coral conservation efforts.

The Florida Aquarium Senior Vice President of Conservation, Science and Research Margo McKnight explains, “The National Aquarium of Cuba picked the site for its strategic and protected location. Ultimately, this nursery will provide them with a bank of corals to be used for restoring their reefs and maintaining genetic diversity which is essential to mitigate the increasing threats to coral reefs, specifically climate change.”

Creating the coral nursery began by anchoring 20 “trees” to the ocean floor.  Each “tree” is a structure nearly 15 feet in length which can hold up to 60 coral fragments of a particular genotype.  The trees have a single anchor point on the bottom and a float at the top which holds them up in the water column and allows them to move with the waves and currents.  This process was developed over many years by the Coral Restoration Foundation’s Ken Nedimyer. Once the trees were installed, the branches of each tree were filled with a specific staghorn coral genotype. The tree design ensures corals, growing above the sea floor away from competition and many predators, will grow faster with greater survival rates.  Nedimyer’s design allows for resiliency during storm surges as the corals hang from the branches and resist breakage.

According to Director of The Florida Aquarium Center for Conservation Scott Graves who managed the project, the marine operation was a huge success. “I have never worked in the field with a better team.  Our Cuban colleagues are highly skilled divers, knowledgeable biologists, tireless workers and a pleasure to be around,” he said.

The first coral conservation collaboration between both aquariums occurred in August of 2016, when the National Aquarium of Cuba’s marine biologists, along with other Association of Zoos and Aquarium institutions, participated in The Florida Aquarium’s staghorn coral spawn collection project in the Florida Keys.

What comes next?  To further help crack the code of coral reproduction, land-based “Coral greenhouses (Arks)” are being constructed where differing genotypes of coral can be preserved and living labs are operated.  Two of eight arks — in total, representing 12,000 square feet — have already been constructed at The Florida Aquarium Center for Conservation in Apollo Beach. The goal is to help build arks at the National Aquarium of Cuba, too.

Lastly, monitoring of reefs and sharing data are critical for both institutions. McKnight comments, “Cuba’s robust coral reefs can provide important clues to healthy reef function. Likewise, we, along with many partners, will continue to monitor the Florida Reef Tract and share the information with our colleagues in Cuba. The collaborative work and shared passion for the ocean by both our teams is turning our plans for reef conservation into reality.”

More in this category: « Neutricks Newsletter in April for Pet Parents Mercy For Animals - The Voice »
back to top