Sharon Keeble author of "My Rescue Dog Rescued Me" will join Jon and Talkin. Pets 4/1/2017 at 5pm EST to discuss and give away her new book Featured 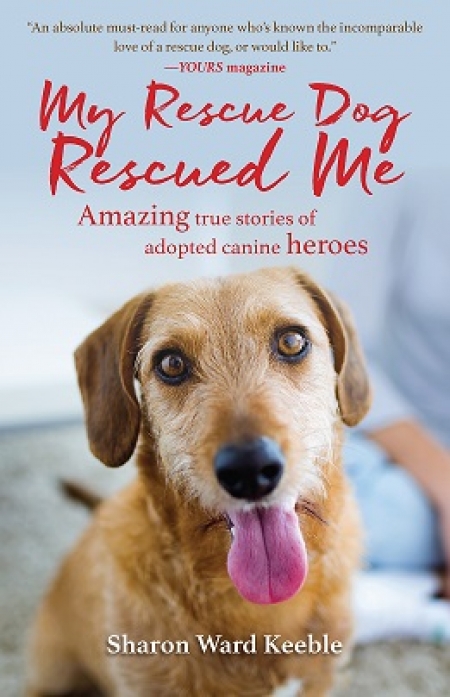 “Sharon Ward Keeble has, in this great collection of stories, managed to capture the unconditional devotion that dogs continue to give to us all despite an often harsh beginning in life.”
--War Paws Charity
My Rescue Dog Rescued Me
Amazing True Stories of Adopted Canine Heroes
By Sharon Ward Keeble
A dog’s breeding and background matter so much less than many people believe. All too often, shelter dogs are dismissed as adoption options because they are “damaged” or “risky.” But inside every dog, no matter where it comes from, is the potential for a loyal, loving, and brave companion. No collection of stories demonstrates that more than those in My Rescue Dog Rescued Me (Skyhorse Publishing, April 2017).
In this inspiring little book, author Sharon Ward Keeble will introduce readers to the incredible dogs who went from being shelter rescues to becoming rescuers in these incredible true stories:
• Toby, the golden retriever who performed the Heimlich maneuver to save his owner’s life
• Liam, the Lhasa Apso-Poodle mix who helped his owner battle an eating disorder
• Hercules, the St. Bernard who saved his owners from burglars on the first day he moved in
• Alfie, the terrier who gave a bullied girl a new lease on life
• And many more!
These canine heroes came to their owner’s aid in their times of greatest need—whether it was saving them from physical

Skyhorse Publishing, Inc.
307 West 36th Street, 11th Floor
New York, NY 10018
(212) 643-6816
www.skyhorsepublishing.com
threats or helping them to recover from mental illness, PTSD, and bereavement. Let these uplifting
stories warm your heart, and show you that adopted dogs truly are man’s best friend.
My Rescue Dog Rescued Me is a book that will be difficult to put down without first making a trip
to the closest animal shelter.
About the Author
Sharon Ward Keeble is a journalist with more than twenty years’ experience of national reporting for
major women’s magazines and newspapers in the United Kingdom and United States, including Closer,
Bella, and the Sunday Mirror. She is the author of China: Passport to Adventure and coauthor of The Horse
Girl. She is based in Florida.
More Praise for My Rescue Dog Rescued Me
“An absolute must-read for anyone who’s known the incomparable love of a rescue dog, or
would like to.”
—YOURS magazine
“[We] commend this book for sharing some wonderful stories of how rescuing a dog from a
shelter can transform not only the life of the dog but also the lives of those who adopt
them.”
—Soi Dog Foundation
“This book has character and heart . . . a must-read for dog lovers, but also for anyone
whose life has been touched by an animal, and knows the comfort and joy they can bring.”
—Take a Break magazine

More in this category: « Chlorpyrifos on Track to Poison Birds and People for the Next 5 Years Animal Welfare Coalition Applauds Reintroduction of “Big Cat Public Safety Act” to Prohibit Private Ownership of Dangerous Big Cats »
back to top

We have 485 guests and no members online