Live from Australia, Author of "Venom Doc" Bryan Grieg Fry will join Jon and Talkin' Pets 2/4/17 at 5pm EST to discuss and give away his new book Featured 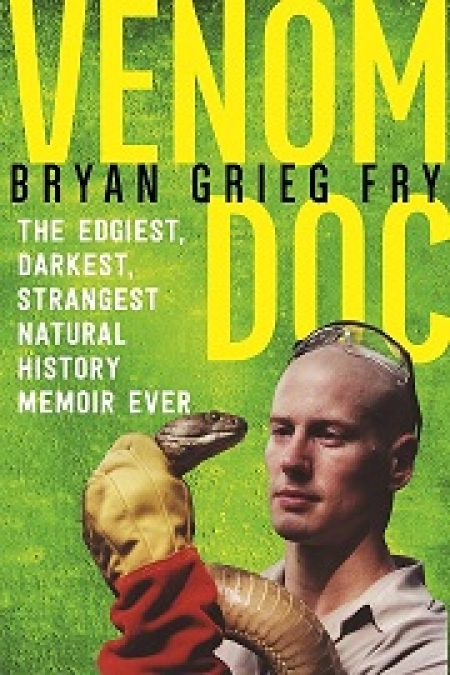 Steve Irwin meets David Attenborough in this jaw-dropping account of studying the world’s most venomous creatures. Venom Doc The Edgiest, Darkest, Strangest Natural History Memoir Ever By Bryan Grieg Fry
Praise on behalf of Venom Doc
“Venom Doc is jam-packed with wildly entertaining behind-the-scenes stories of how Bryan became an expert on venom and the trials and tribulations of a life in science. Brilliant, flamboyant, and sometimes controversial . . . This book is thrilling and thought-provoking!” —Nigel Marven, BBC television host
“If you’re a fan of the animals most love to loathe, then this book is definitely for you.” —Discover magazine
“If the first two rules of writing one’s memoirs are to live a remarkable life and to relate its anecdotes in an interesting, entertaining way, then Bryan Fry's Venom Doc nails it on both counts.” —Ray Morgan, The Venom Interviews
A One-of-a-Kind Tale of a Man’s Passion for Poison
Venomologist Bryan Grieg Fry has one of the most dangerous jobs on earth: he works with its deadliest creatures. He’s been bitten by twenty-six poisonous snakes, stung by three stingrays, and survived a near-fatal scorpion sting while deep in the Amazon jungle. He’s also broken twenty-three bones, including his back in three places, and had to learn how to walk again. But when you research only the venom you yourself have collected, the adventures—and dangers—never stop. Imagine a three-week-long first date in Siberia catching venomous water shrews; a wedding attended by Eastern European prime ministers with their machine-gun-wielding bodyguards and snakes; or leading a team to Antarctica that results in the discovery of four new species of venomous octopi. With an insatiable appetite for venom, Bryan has traveled the world collecting samples. He’s encountered poisonous creatures of all kinds, including the Malaysian king cobra, the Komodo dragon, and the brush-footed trapdoor spider. He recounts his lifelong passion for studying the world’s most venomous creatures in this outlandish, captivating memoir, where he and danger are never far apart. Venom Doc: The Edgiest, Darkest, Strangest Natural History Memoir Ever (Arcade Publishing; October 2016) is a one-of-a-kind tale of a man’s passion for poison. Fry is a doctor, writer, documentary and TV personality, and professor at the Venomics Laboratory at the University of Queensland. Originally published in Australia, this is Venom Doc’s North American debut, and it will be many readers’ first exposure to Fry. Prepare to follow his colorful journeys into remote corners of the world where he searches for venom that has led to medical cures and scientific breakthroughs. Fry experienced an Icarus-like crash when he sustained a near-career-ending injury, breaking his back. While stuck in a hospital for four months, and during his long recovery, Fry thought up this book as a self-help exercise. The result is a wild, sometimes zany, gripping, and surprisingly inspiring read. Anyone who loves adventures, big personalities, animals, and moving stories will adore the fiercely exciting ride that is Fry’s memoir Venom Doc.
About the Author: Bryan Grieg Fry was born in 1970 to a Norwegian mother and an American father and educated in the United States, attending Portland State University before pursuing a PhD in Australia at the University of Queensland’s Centre for Drug Design and Development. His papers and articles have been published widely in academic journals and in the trade media, including Wired, Cosmos, and National Geographic, and he has appeared in documentaries and television programs. He also is the author of Venomous Reptiles and Their Toxins (Oxford University Press). He is associate professor in the School of Biological Sciences at the University of Queensland where he is group leader of the Venomics Laboratory. He resides in Queensland, Australia.
Venom Doc The Edgiest, Darkest, Strangest Natural History Memoir Ever By Bryan Grieg Fry | Arcade Publishing hardcover, also available as an ebook On Sale: October 4, 2016 ISBN: 978-1-62872-699-2 Price: $24.99
Additional Praise for Venom Doc:
"Ask Bryan Grieg Fry what he does for a living, and you're suddenly thrown into a strange world full of venom and danger. In Venom Doc, Fry takes readers on a gripping tour of that world, showing why the dangerous creatures he spends his life with are also among the most fascinating."—Carl Zimmer, author of Parasite Rex
"A pioneering scientist of the topmost caliber” —Sean P. Bush, MD, FACEP, Professor of Emergency Medicine, with Tenure, East Carolina University Brody School of Medicine "Venom Doc is a rollercoaster ride. . . . Venom Doc offers a no-holds barred account of his life journey and transformation, interspersed with near-death experiences, euphoric highs and reflections on his own mortality. . . . Throughout, Bryan offers his scientific insight into the creatures he studies and the elixir he ultimately craves—venom." —Dr. Nick Casewell, Senior Lecturer at the Alistair Reid Venom Research Unit, Liverpool School of Tropical Medicine
“A wild acid-soaked synthesis of Hunter S. Thompson and Gerald Durrell . . .”—Dr. Steve Backshall, BAFTA-winning naturalist, writer, and television presenter for Discovery Channel and National Geographic

We have 317 guests and no members online