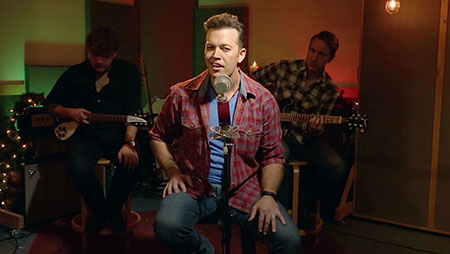 Shot at the Hilson Studio in Nashville, the acoustic videos for “The Christmas Song” and “Christmas Medley”showcase two of the tracks off Hoge’s Christmas album Christmas Is Here — available for purchase exclusively at LucasHoge.com. Hoge’s “Christmas Medley” combines holiday favorites “O Come All Ye Faithful,” “We Three Kings,” “God Rest Ye Merry Gentleman” and “My Favorite Things.” The country artist showcases his soulful vocals on his take of “The Christmas Song” that is sure to put you in the holiday spirit just in time for Christmas.

About Lucas Hoge
Hoge currently on Rebel Engine rose to national fame as a star of Animal Planet's “Last Chance Highway,” which led to appearances on “The Today Show,” “Inside Edition,” “The Daily Buzz,” “Daytime TV” and many more. Hoge is the Music Ambassador for Cabela’s and is also a passionate supporter of the U.S. military having traveled to various countries throughout the Middle East and beyond to perform for troops, for the past 8 years on the Wrangler National Patriot Tour. Hoge is also the Celebrity spokesperson for Guardian Angels For Soldier's Pet. Hoge has been visiting radio stations all over the U.S. promoting his latest single, “Boom Boom.”
# # #
Read 1181 times
Published in News
Tagged under

We have 334 guests and no members online