PIGEON FORGE, Tenn. (November 30, 2016) – In a video message released this evening, Dolly Parton announced a new effort by The Dollywood Company and The Dollywood Foundation to establish a fund to assist the victims of the Great Smoky Mountain wildfires in Tennessee. The new My People Fund will provide $1000 each month to Sevier County families who lost their homes. 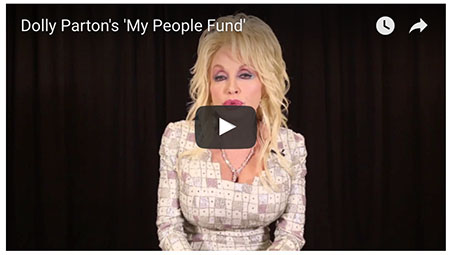 “I’ve always believed charity begins at home and my home is some place special,” Parton explained. “That’s why I’ve asked my Dollywood Companies—including the Dollywood theme park, and DreamMore Resort; my dinner theater attractions including Dixie Stampede and Lumberjack Adventure; and my Dollywood Foundation—to help me establish the My People Fund.

“We want to provide a hand up to those families who have lost everything in the fires. I know it has been a trying time for my people and this assistance will help get them back on their feet.”

Anyone who would like to contribute to the My People Fund may visit dollywoodfoundation.org.

More information on the program will be released on Friday, December 2.


About The Dollywood Company:
A highly-awarded and widely-recognized leader in the amusement industry, The Dollywood Company consists of the 150-acre Dollywood theme park; the 35-acre Dollywood’s Splash Country; Dollywood’s DreamMore Resort; and Dollywood’s Smoky Mountain Cabins. As unique as its namesake and owner Dolly Parton, Dollywood is the 2010 Applause Award winner, the theme park industry’s highest accolade; winner of nearly 30 Golden Ticket Awards; and recipient of 25 Brass Ring Awards for Live Entertainment (more than any other theme park in the world). In 2014, Dollywood was named a top three US theme park by USA Today and TripAdvisor recognized Dollywood as a top 20 worldwide theme park in 2015. Dollywood is open nine months a year (late March through early January) and offers rides and attractions, shows, and a dozen crafters authentic to the East Tennessee region. Dollywood’s Splash Country, recognized by the Travel Channel as one of the country’s most beautiful waterparks and named 2009’s Must-See Waterpark by the International Association of Amusement Parks & Attractions, operates from Memorial Day to Labor Day. The 300-room Dollywood’s DreamMore Resort provides guests spectacular mountain views and family-friendly amenities next door to Dollywood theme park and Dollywood’s Splash Country. Dollywood’s Smoky Mountain Cabins offers luxurious cabin accommodations overlooking Dollywood. For more information, call 1-800-DOLLYWOOD or visit dollywood.com. Operating days and hours vary.
# # #
Read 943 times
Published in News
Tagged under

More in this category: « AMTRAK AND UNIVERSAL PICTURES HOME ENTERTAINMENT GET ON BOARD TO CELEBRATE ILLUMINATION ENTERTAINMENT’S THE SECRET LIFE OF PETS WITH FIRST ‘PETS RIDE FREE’ PROMOTION My dear friend Tippi Hedren will join Talkin' Pets 12/03/16 at 5pm EST to chat about Shambala and her new book »
back to top

We have 260 guests and no members online