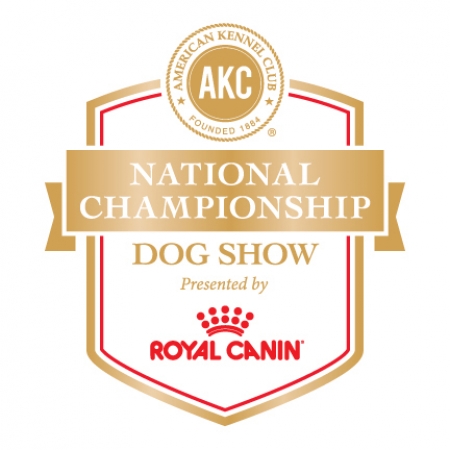 Dogs from 49 States and 100s of International Exhibitors

Will Vie for Best in Show

NEW YORK, NY (November 22, 2016) – The AKC National Championship presented by Royal Canin has drawn record entry numbers in its 16th year. An entry of 4,710 dogs will compete for the title of National Champion on December 17 and 18, 2016 in Orlando, Florida. Combined with the other weekend events the AKC Agility Invitational, the AKC Obedience Classic, AKC National Owner-Handler Series Finals, NADD/AKC Diving Dogs Championship, and the Junior events, the overall show totals top 7,000 entries, making this the largest dog show held in the United States since the AKC 1984 Centennial event and the largest dog show North America.

“The AKC National Championship presented by Royal Canin is a one-of-a-kind experience for any dog lover,” said Dennis Sprung, AKC President and Show Chairman.  “With more than 1,000,000 square feet of event space, top canine athletes competing in a wide variety of dog sports, tons of vendors selling unique dog-themed items in time for the holidays, more than 150 AKC Meet the Breeds® booths and more, there is nothing that can compare to this canine extravaganza.”

Other events in the one million square feet of canine-centric event space during the week of December 13-18, 2016 include the:

Judges: Judge Dr. Anthony DiNardoof West Hartford, Connecticut will select the AKC National Championship Best in Show (BIS) winner. The owner(s) of the BIS winner will receive more than $50,000. Dr. Robert Indeglia of Narragansett, Rhode Island will judge Best Bred-by-Exhibitor in Show from over 1,000 Bred-by-Exhibitor entries (dogs being shown by their owner/breeder). Best Bred-By Exhibitor in Show will receive $15,000.

Television and Streaming Coverage: The AKC National Championship evening competition will be streamed live beginning at 6:00 p.m. each night on www.akc.org, www.royalcanin.com/akcdogshow and live on Fido TV. The show will be televised on the Hallmark Channel on January 23, 2017 6-9 PM ET/PT. The Bred-By Exhibitor groups, Junior Showmanship Finals, Best Miscellaneous, agility and obedience will be taped and available on demand at www.akc.org.

AKC National Owner-Handled Series Finals: The AKC NOHS Finals Best in Show competition will be judged by Mrs. Paula Nykiel of Washington, Missouri on Saturday, December 17. This invitation-only competition is open to the top ten ranked dogs in the AKC National Owner-Handled Series in each breed/variety from the 2016 qualifying year and drew an entry of 711 dogs. The NOHS Group Finals will be taped and available on demand at www.akc.org.

AKC NATIONAL CHAMPIONSHIP BY THE NUMBERS

OBEDIENCE CLASSIC AND AGILITY INVITATIONAL BY THE NUMBERS

To purchase tickets or get more information about the show, visit us at www.akc.org/events/national-championship/ or on Facebook and Twitter.

More in this category: « A Happy Thanksgiving message from our friend Linda Blair A holiday message from Neutricks - Adopt an Older Pet »
back to top

We have 384 guests and no members online