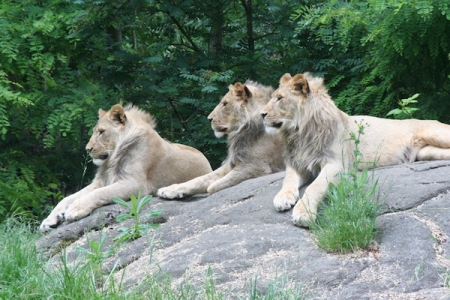 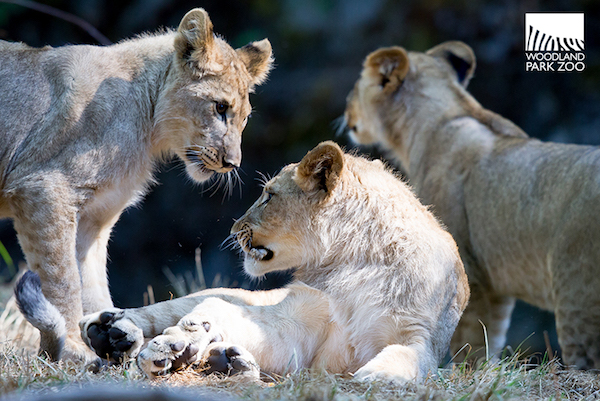 Oakland Zoo after a mandatory 30-day quarantine at Oakland Zoo’s vet hospital and transition from holding areas.  The eighteen month-old lions are brothers, making up a ‘coalition’, meaning an all-male social group, that are rarely seen in AZA accredited U.S. Zoos.

The move was based on a recommendation made by the Species Survival Plan (SSP), a conservation-breeding program across accredited zoos to increase the genetic diversity and enhance the health of species populations. Named Tandie, Mandla and Gandia, the trio is now the juvenile neighbor to Oakland Zoo’s resident lion, Leonard, a senior at 16 years old. There are no plans to integrate Leonard and the coalition, as coalitions are known to fight fiercely with male lions unknown to them. Young male lions commonly form bachelor groups in the wild while developing skills to form their own prides later in life.

The lion brothers were transported by plane from Seattle on May 25th with the generous support of the employees at the local Merrill Lynch Wealth Management offices in Oakland and Walnut Creek. Hearing about the Zoo’s efforts to bring the lions over, they raised $7,500 through bake sales and other donation efforts  that was matched by Bank of America for a total of $15,000 to cover flight costs.

“Lion coalitions are often seen in the wild, but rarely in zoos; so most people find this normal aspect of lion sociality peculiar! We are excited for guests to see the three brothers lounging and interacting with each other, and to learn about the threats facing African lions. We are one of a few zoos chosen to work with Southeast African lions, and though there are no future plans for females or a breeding program, we have a very important story to tell!,” Darren Minier, Zoological Manager at Oakland Zoo.

With Oakland and Woodland Park Zoo’s strong dedication to animal welfare, the three lions were successfully crated at Woodland Park, transported to Oakland Zoo, quarantined, then re-crated and transferred to the Simba Pori exhibit using only voluntary, positive reinforcement training – no anesthesia, tranquilizers, or force was used at any time in the 12 week process. This aided in the least amount of stress possible for the lions at all points in the process, and was only possible through the skill of dedicated, knowledgeable, and caring keeper staff.

Southeast African lions are one on the remaining eight species of lion. It’s estimated that only 30,000 to 35,000 lions remain in the wild – a decrease of 30% in the past twenty years. Threats include hunting, human-wildlife conflict, human encroachment resulting in habitat loss, and prey-base depletion. Oakland Zoo supports lions in the wild through our conservation partner, the Uganda Carnivore Program. Visit Oakland Zoo on World Lion Day, August 6, to celebrate lions, learn more about the conservation challenges they face and the wild, and what you can do to help.

The Bay Area's award-winning Oakland Zoo is home to more than 660 native and exotic animals. The Zoo offers many educational programs and kid's activities perfect for science field trips, family day trips and exciting birthday parties. Oakland Zoo is dedicated to the humane treatment of animals and wildlife conservation onsite and worldwide; with 25¢ from each ticket donated to support conservation partners and programs around the world. The California Trail, a transformational project that more than doubles our size, opens in 2018, and will further our commitment to animal care, education, and conservation with a focus on this state’s remarkable native wildlife. Nestled in the Oakland Hills, in 500-acre Knowland Park, the Zoo is located at 9777 Golf Links Road, off Highway 580. The East Bay Zoological Society (Oakland Zoo) is a nonprofit 501(c)3 organization supported in part by members, contributions, the City of Oakland and the East Bay Regional Parks. For more information, go to: www.oaklandzoo.org

We have 1007 guests and no members online