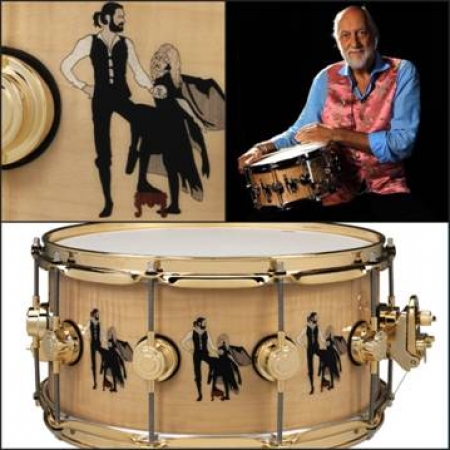 Music legend and wildlife advocate Mick Fleetwood has chosen the International Fund for Animal Welfare (IFAW) as the benefiting charity of the Drum Workshop snare drum “Rumours,” created in his honor and named after Fleetwood Mac’s most iconic album. “Rumours” is a limited edition collection (only 250 produced) handmade with maple and custom gold hardware and created with input from the artist himself. The album’s cover art is recreated in hand-inlaid exotic woods.

Fleetwood, who is a long-time Hawaii resident and business owner in Maui, worked with IFAW to support passage of a state bill that cracks down on trafficking of ivory and other wildlife products from imperiled species. He joined other Hawaii-based musicians, actors and business leaders in signing an open letter in the Honolulu Star-Advertiser encouraging residents to support this legislation. In addition, Mick hosted an IFAW event at his restaurant, “Fleetwood’s on Front Street,” that was attended by notable Hawaii residents and wildlife supporters who wanted to learn about the issue and join the effort. Mick also submitted testimony to the House Committee on Water and Land Committee and the House Committee on Judiciary, urging lawmakers to protect wildlife and make Hawaii a leader in global conservation efforts.

In early May, the Hawaii legislature passed this landmark legislation, making it the fifth state in the nation to prioritize endangered species over trade in unnecessary wildlife products. Elephants, rhinos, tigers, and countless other species face unprecedented threats – from habitat loss to rampant poaching – but this successful fight shows that we can make a difference.

We sincerely thank Mick for his passionate support of this campaign and his leadership in raising awareness and funds for IFAW’s work to protect imperiled wildlife.

The Rumours snare drum can be purchased here.

More in this category: « Dave Merrick President of Neutricks will join Jon and Talkin' Pets 6/25/16 at 720pm EST to discuss and give away Neutricks for dogs and cats Born Free USA Calls for Immediate Review of Zoo Safety after Recent Zoo Incidents in Cincinnati, Salt Lake City, Oshkosh, and Tokyo »
back to top

We have 332 guests and no members online