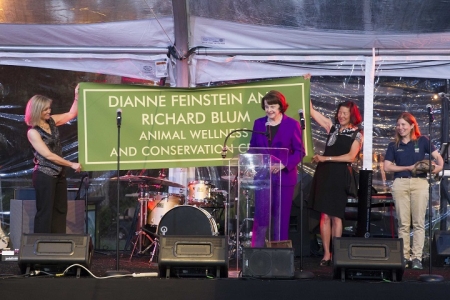 SAN FRANCISCO – From endangered Asian rhinos to nearly extinct mountain yellow-legged frogs, San Francisco Zoo & Gardens’ role in protecting and conserving wildlife was the theme of its signature fundraiser, ZooFest, on Saturday, April 30.   Honored guest U.S. Senator Dianne Feinstein spoke about her love of animals and decades of conservation work, including her latest effort to end poaching with the introduction of S. 27, Wildlife Trafficking Enforcement Act.

At the event, SF Zoo announced and unveiled the “Dianne Feinstein and Richard Blum Animal Wellness and Conservation Center,” one of the only dedicated facilities in the country to improving husbandry and well-being of Zoo animals.

“About 30 percent of our animals are rescued, which is more than most zoos in the country,” said Peterson.  “Thank you to all the donors, members and guests who make it possible to not only save these animals, but communicate important conservation stories to the community for a multiplier effect.”

All funds raised at ZooFest benefit the care and comfort of the animals and help the Zoo accomplish its mission to connect people with wildlife, inspire caring for nature and advance conservation action.  One generous and anonymous donor gifted $100,000 to the Mexican gray wolf exhibit.  The habitat, under construction now, will help SF Zoo care for three incoming animals.  Mexican gray wolves, which were nearly extinct, are part of a Species Survival Plan, and the wolves coming to the Zoo may someday be released back into the wild.  Silent auction items included paintings from the inaugural Animal Artists in Residence project, which sold for nearly $50,000.

the 40th Anniversary of the Zoo’s groundbreaking Nature Trail, an educational program which teaches young people to be wildlife conservation ambassadors.  Attendees also viewed lions and tigers inside the Lion House and interacted with ambassador animals from the Koret Animal Resource Center, typically utilized for children’s educational purposes.

Established in 1929, the San Francisco Zoo and Gardens connects people to wildlife, inspires caring for nature and advances conservation action. An urban oasis, the Zoo and Gardens are home to more than 2,000 exotic, endangered and rescued animals representing more than 250 species as well as seven distinct gardens full of native and unusual plants. Located at the edge of the Pacific Ocean where the Great Highway meets Sloat Boulevard, the Zoo is open 365 days a year from 10 am to 5 pm (summer hours) and is accessible by San Francisco MUNI "L" Taraval Line.

We have 330 guests and no members online