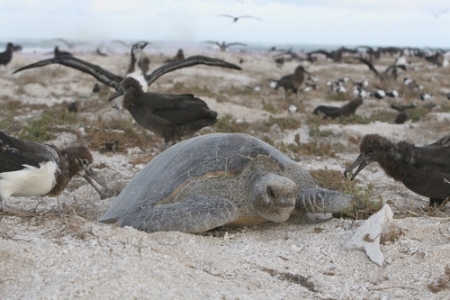 Chelonian Conservation and Biology – Four decades of research on Hawaiian green turtles (Chelonia mydas) are consolidated in this comprehensive review article, offering new and updated demographic information. The data collected show how the green turtle has rebounded from near extinction in the 1970s to a population of about 4,000 breeding females today.

The scope of research conducted during these years is detailed in the journal Chelonian Conservation and Biology. The Hawaiian Institute of Marine Biology and the U.S. Fish and Wildlife Service began studying the green turtle in 1973 by monitoring and tagging nesting turtles. In 1982, a marine turtle research program within the National Oceanic and Atmospheric Administration (NOAA) started studying sea turtle strandings and necropsying dead turtles. A companion program launched in 1990 sought to rescue, rehabilitate, and conduct clinical research on stranded turtles.

Early research showed that unregulated commercial hunting of Hawaiian green turtles, primarily for the restaurant trade, was unsustainable. Preliminary data from that period convinced the state of Hawaii to legally ban all commercial taking of turtles. This was followed by adding the green turtle to the U.S. Endangered Species Act.

“I am extremely encouraged and confident that the resiliency and durability of the Hawaiian green turtle population can overcome any reasonable challenges it may face, so long as human take is sustainable,” said George H. Balazs, a researcher with NOAA and lead author of the review.

The research on green turtles in the Hawaiian Islands offers a model for understanding recovering sea turtle populations. Conservation and management practices in Hawaii founded on this research serve as a learning tool for other Pacific islands trying to sustain important sea turtle resources.

Full text of the article, “A Review of the Demographic Features of Hawaiian Green Turtles (Cheloniamydas),” Chelonian Conservation and Biology, Vol. 14, No. 2, 2015, is now available online.

About Chelonian Conservation and Biology
Chelonian Conservation and Biology is a scientific international journal of turtle and tortoise research. Its objective is to share any aspects of research on turtles and tortoises. Of special interest are articles dealing with conservation biology, systematic relationships, chelonian diversity, geographic distribution, natural history, ecology, reproduction, morphology and natural variation, population status, husbandry, community conservation initiatives, and human exploitation or conservation management issues. For more information about this journal, see http://www.chelonian.org/ccb/.