L. Douglas Keeney author of BUDDIES will join Jon and Talkin' Pets 11/14/15 at 5 PM EST to discuss and give away his book Featured 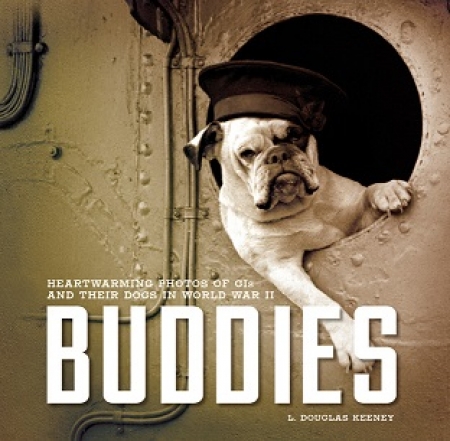 Enjoy the fun photos and heartwarming stories of WWII's American soldiers and their dogs.
One of the most effective forms of American propaganda during World War II was the morale-boosting dog (or buddy) photo. The photos reassured folks back home that despite the horrors of the war, their boys were still boys.
Buddies: Heartwarming Photos of GIs and Their Dogs in World War II is chock-full of photos of warriors and their pups, along with stories of the dogs and their service in Europe and the Pacific. This new edition includes even more photos and tales of furry friends on the front.
Max, a Boxer, was a full-fledged paratrooper in the Army who earned his wings after five jumps. Skippy, a pit bull pointer, was such a big part of his bomber crew that members painted him on their B-17 Flying Fortress and fitted him with a custom oxygen mask. Don't forget the salty dogs of the navy such as Hobo, who followed his pals when they took a beach. "Private" Chico, a marine mutt, promptly dug his own foxhole after landing on Bougainville. The US Coast Guard counted many puppies who were born on ships among their furriest, and possibly most beloved, sailors. Pete the Pooch, a tenacious terrier, even helped bring in mooring lines!
Although dogs were the most popular mascot, a few chickens, crows, cats, goats, and monkeys made their way into the hearts of our fighting men. Get the full story on these companions too!
ABOUT THE AUTHOR L. Douglas Keeney is a military historian and researcher and the author of 15 Minutes: General Curtis Lemay and the Countdown to Nuclear Annihilation. He is the cofounder of The Military Channel on which he hosted a series called On Target. He has since appeared on the Discovery Channel; CBS; and the Learning Channel and is the author of ten books of military history.
ABOUT ZENITH PRESS Zenith Press publishes historical non-fiction in narrative illustrated and graphic formats.  Building on a core of 19th and 20th century military history in America, Zenith also publishes titles on the history of aviation, technology  and science, and also in selected areas of cultural and social history - all with a distinctly American angle.  From a narrative of a famed American WWII flying squadron to an illustrated celebration of NASA's famed Space Shuttle program to a cultural history of moonshine in the 19th and 20th centuries, Zenith books are engaging American stories with a firm historical foundation.

More in this category: « Born Free USA to Testify Today at Hearing in New Jersey on Trophy Hunting Ban, Critical to Saving Animals from Extinction Boone Smith from Nat Geo Wild's 10 Days of Thanksgiving will join Jon and Talkin' Pets 11/21/15 at 5 PM EST to discuss Big Cat Week »
back to top

We have 441 guests and no members online