Caitlin Quinn, Assistant Director of Animal Farm Foundation will join Jon and Talkin' Pets at 5 PM EST 8/01/15 to discuss the truth about the majority of "Pit Bull" dog owners Featured 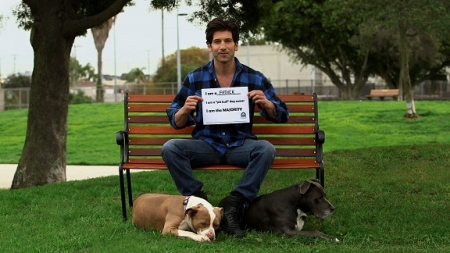 The PSA is narrated by Jon Bernthal, the actor known for his roles on AMC’s “The Walking Dead” and major box office hits like “The Wolf of Wall Street.” Holding his “I am the MAJORITY” sign, Bernthal identifies himself as a father and a proud “pit bull” dog owner.

“My dogs, Boss and Venice, are members of my family, and I love them just like they’re one of my kids,” said Bernthal. “Just like us, dogs deserve to be treated as individuals. Laws that discriminate based on breed unfairly target not only dogs but also the innocent families who love and care for them.”

Among those featured in the PSA alongside their “pit bull” dogs are: Eric, a cancer biologist and his dog, Red, of Cambridge, Mass.; Nonny, a great grandmother and Ginger, of Washington D.C.; Father Humble, a priest and Aura, of Flowery Branch, Ga.; Rebecca, a teacher and Carmela, of Tucson, Ariz.; and many others.

“Reckless dog owners cannot be correlated with any particular breed or type of dog,” said Caitlin Quinn, director of operations for Animal Farm Foundation. “Discriminating against dog owners because of what their dog looks like will never make for a safer community. Holding reckless owners accountable will.”

Research conducted by various experts has concluded that breed specific legislation is ineffective in reducing dog bites and enhancing public safety. The American Veterinary Medical Association’s exhaustive review of dog bite studies conducted in North America, and elsewhere, concluded that separate regulation of “pit bull” dogs is not a basis for dog bite prevention[1]. Further, the “pit bull” type as a “breed” is particularly ambiguous, encompassing a range of pedigree breeds, informal types and physical appearances that cannot be reliably identified. Issues with breed identification make breed specific legislation difficult and costly to enforce, taking resources away from protecting the community from truly dangerous animals, which result from reckless dog owners, no matter the breed.

Animal Farm Foundation is joined by many experts and organizations that oppose breed specific legislation, including the White House, the American Bar Association, The Humane Society of the United States (HSUS), the Association of Pet Dog Trainers, the American Kennel Club and others. Animal Farm Foundation believes the most effective path to building safe, humane communities is through creating and enforcing non-discriminatory Responsible Pet Ownership laws.

“HSUS has long supported efforts to hold all dog owners accountable for the humane treatment and safe containment of their dogs, regardless of the dog’s breed,” said Wayne Pacelle, president and CEO of The Humane Society of the United States.  “Instead of unenforceable and unfair breed discrimination laws, we must foster safe and humane communities by treating all dogs as individuals and empowering pet owners.  Our Pets for Life program stands as proof that the overwhelming majority of pet owners care deeply for their pets, and “pit bull” dog owners are no exception.”

“Pit bull” dog owners can join The Majority Project by printing and personalizing an “I am the MAJORITY” sign and proudly displaying it in a photo with their dog. Photos can be submitted according to the instructions provided at TheMajorityProject.com and shared via social media using #TheMajorityProject.

More in this category: « IFAW Statement on the Killing of Cecil the Lion Born Free Speaks Out About Cecil The Lion »
back to top

We have 442 guests and no members online