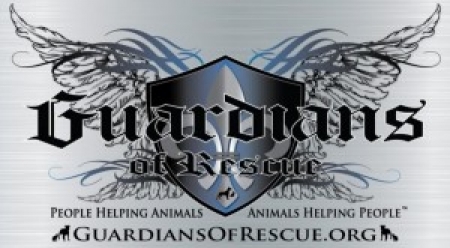 SMITHTOWN, NY – (April 6, 2015) – Most people are aware that we have soldiers overseas in Afghanistan. But what most are not usually aware of is that many times they become attached to dogs that they find roaming in the area. For some, it’s the bond they create with those new pets that keep them feeling happy and hopeful. Yet when their tour of duty is over and it’s time to go back home to the U.S., they find themselves having to break that bond and leave the dog behind. Guardians of Rescue, an international animal rescue organization, works to change that by reuniting soldiers with the dogs they had to leave behind.

"Through our No Buddy Left Behind Program, we have helped numerous soldiers to be reunited with the dogs they were caring for in Afghanistan,” stated Robert Misseri, founder and president of Guardians of Rescue. “It’s the least we can do for these soldiers, who miss the dogs and worry about their fate. But we can’t do it alone; we need the public’s help in order to make it a successful mission.”

There are costs involved in bringing the dogs back to the U.S. from the Middle East. This expense is one reason that Guardians of Rescue reaches out to the public for donations in order to help make it possible. The group is working with the only Afghanistan-based animal shelter, Nowzad, to make the mission possible and successful. The dogs will be flown into John F. Kennedy International Airport at the end of April, and then will be transported on to Portland, Ore., where they will be reunited with the soldiers they were with in Afghanistan.

The dogs being reunited were found and rescued by a couple of U.S. Army soldiers. When they spotted the mom she had four puppies and a wounded paw, and they saw the way other stray dogs had been mistreated in the area. They decided to help nurse the wounded leg back to health, and went on to care for and bond with the mother and her puppies. The platoon medic will be adopting her, while another soldier takes two of the puppies, and a third soldier has expressed interest in another one of the puppies.

“These soldiers have given us so much, the least we can do it is reunite them with these dogs they bonded with,” said Dori Scofield, vice president of Guardians of Rescue. “Every little bit helps, and it all adds up to meaning so much for them and the dogs. Together we can save them!”

The cost to bring the dogs back to America and deliver them to the soldiers is estimated at $6,000. Guardians of Rescue is seeking donations from the public to help with this mission. Those who would like to learn more and make a donation can do so by logging onto: http://guardiansofrescue.org/banners-view/no-buddy-left-behind/.

About Guardians of Rescue Based in New York, Guardians of Rescue is an organization whose mission is to protect the well being of all animals. They provide aid to animals in distress, including facilitating foster programs, rehabilitation, assisting other rescue groups, and providing support to families, both military and not, who need assistance due to economic factors. To learn more about Guardians of Rescue, visit the site at www.guardiansofrescue.org.

We have 591 guests and no members online