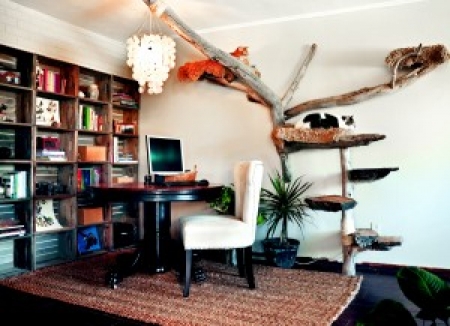 'Catification': New book shows you how to make your feline feel at home without littering a room

In their new book, cat aficionados Jackson Galaxy and Kate Benjamin explain how to please your pet with cat-tastic additions that match the rest of your house.

Enno WolfPeek-a-mew! Enno Wolf and Aida Renout of The Netherlands build a kitty playground on their ceiling out of existing cat climbing furniture.

It’s time to give your house some cat-titude.

And feline superfans Jackson Galaxy, 48, and Kate Benjamin, 43, know just how to transform your pad into a kitty-friendly paradise without wrecking a room’s aesthetic.

Jeremy P. Tarcher/Penguin‘Catification: Designing a Happy and Stylish Home for Your Cat (and You!)’ ($21.95) hits stores Oct. 14.

Their new book is called “Catification: Designing a Happy and Stylish Home for Your Cat (and You!).”

“We are going to ‘Catify’ the world,” Galaxy told the Daily News of the book, which will be released, claws out, in October. “That is our goal.”

The tattooed rock and roller, who lives in Los Angeles, is the host of Animal Planet’s “My Cat From Hell” program, and he is all about the “cat mojo.”

What makes cats tick, he writes in the book, “is confident ownership of territory and the instinctive feeling of having a job to do in that territory.”

Understanding how your cat sees the world is part one of the “Catification” process.

Rebecca Brittain   Avoid cat-tastrophes by giving your kitties plenty of places to perch. This cat tree, which was submitted by Rebecca and Richard Brittain of Clearwater, Fla., is deceivingly simple to build.

Mike Wilson   Cats like to climb, so it’s up to their guardians to ‘set them up for success.’
PreviousNext
Enlarge
Rebecca Brittain

Kate Benjamin has 11 house cats and takes care of a few more at her Phoenix design studio.

Jackson Galaxy has five house cats and ‘four or five ferals that we consider our own.’

Meanwhile, Benjamin, the Phoenix-based founder of feline-focused Hauspanther design site, specializes in the other aspect of Catifying your house — pleasing your pet without turning your home into an unsightly array of cat towers and litter boxes.

“The people have to like it. It has to function for the people as well as the cats,” she told The News. “It has to be easy to clean and something you aren't ashamed of.”

As such, the book is filled with do-it-yourself projects, including kitty hammocks, cat patios (“catios”) and catwalks, but each with its own aesthetic. And many of them were submitted by other cat lovers.

As for the felines, Galaxy said they need to “find their mojo based on vertical access.”

This requires you to “set them up for success,” which can be as simple as clearing off your mantle or book case.

You can also rearrange your furniture or think outside the litter box and repurpose something you already own.

The authors say that compromise is key if you don’t want a sour puss on your hands. They compare Catification to being an interior designer with a furry client.

“Anybody can do it, and you can do in a way that doesn't make you look like the crazy cat lady,” Benjamin said.

From “Catification: Designing a Happy and Stylish Home for Your Car (and You!)”

Submitted by: Nico and Katu of Bogota, Colombia

“This was not an expensive project; overall we spent around a hundred dollars. We bought wood from a local store, and the accessories — like screws, wood sealant, shelf brackets, flat braces, rivets and a PVC tube — from a warehouse store.”

“The trick for successful construction is having a clear idea of the design before you start.”

“At first Arana didn’t pay much attention to the playground. It was a strange thing for her, and she wouldn’t go near it, but with a little bit of patience and some food to encourage her, Arana quickly figured out that it was her own special place. Now she uses her playground every single day.”

Galaxy and Benjamin are taking "Catification" on the road and will stop at the Union Square Barnes & Noble on Oct. 22.

More in this category: « MADISON AND PENCE BORN AT THE SF ZOO Jo Chan from Cynjo will join Jon and Talkin' Pet 11/01/14 at 6:30 PM EST to discuss and give away his dog product the Foobler »
back to top