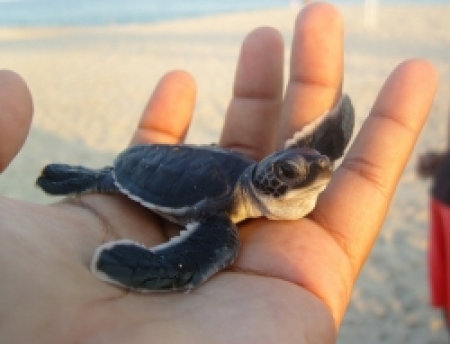 Cabo San Lucas, Mexico,  July 28, 2014 --(PR.com)-- July marks the beginning of sea turtle nesting season on the coasts of Los Cabos, Mexico and Casa Dorada Los Cabos Resort and Spa, a five-star beachfront resort in Cabo San Lucas, leads the way in protecting these marvelous creatures.
Having created the Casa Dorada Sanctuary Project back in 2008 and working together with other local entities, the resort has dedicated significant financial and human resources to ensuring that adequate measures are in place to safeguard nests, protect eggs and eventually successfully release baby turtles into the sea.
Every late summer and fall, guests staying at Casa Dorada are fortunate to witness the arrival of female turtles on the beach right in front of the resort to lay their eggs. Then, 6 to 9 weeks later baby turtles are born making their way to the sea for the very first time, offering one of nature’s most touching spectacles. The most common turtle species encountered in Los Cabos is the olive ridley, whose regular nesting period is from July to October, while the release of baby turtles usually takes place in September and October.
Casa Dorada and its turtle conservation efforts To date, the Casa Dorada Sanctuary Project has protected more than 160,000 turtle eggs and released nearly 140,000 offspring into the sea. These efforts have helped in making the Cabo San Lucas Bay and Los Cabos a vitally important nesting area for the olive ridley.
Local involvement In order to continue protecting turtles in the area, regional governments have created The Los Cabos Sea Turtle Conservation Program. In 2005 many of the community’s hotels, resorts, restaurants, and organizations have joined in, creating The Los Cabos Sea Turtle Protection Network. In 2008, Casa Dorada was officially added to this strategic coalition. Later, the Ministry of Environment and Natural Resources granted the hotel federal permission to establish a working nursery for the safekeeping of olive ridley eggs, a privilege only a handful of institutions in the Southern Baja have enjoyed.
About Casa Dorada With an incomparable location on Medano Beach--the best swimmable beach of Cabo, Casa Dorada is just steps away from world-class shopping, dining, entertainment, and the marina. As a member of Preferred Hotels & Resorts, a collection of the world’s finest independent luxury hotels, Casa Dorada Los Cabos brings the upscale service and family-friendly features to the Cabo San Lucas oceanfront. The Resort grants visitors a more convenient, yet equally spectacular, alternative to the more remote hotel zone of the Tourist Corridor. Boasting unobstructed vistas of Land’s End and the famous Arch, Casa Dorada is just 30 minutes away from Los Cabos International Airport. All of the 185 spacious one-, two- and three-bedroom suites and penthouses, open up to Los Cabos’ most dazzling ocean view, while the luminous and contemporary interiors ensure your comfort and satisfaction.
Read 2339 times Last modified on Tuesday, 29 July 2014 14:11
Published in News
Tagged under

More in this category: « Shelley Morrison and Walter Dominguez - writer, directed and producers of "Weaving the Past: Journey of Discovery" will join Jon and Talkin' Pets to discuss their upcoming film ASPCA Celebrates Five Years of the ‘Rescuing Racers’ Initiative »
back to top

We have 505 guests and no members online