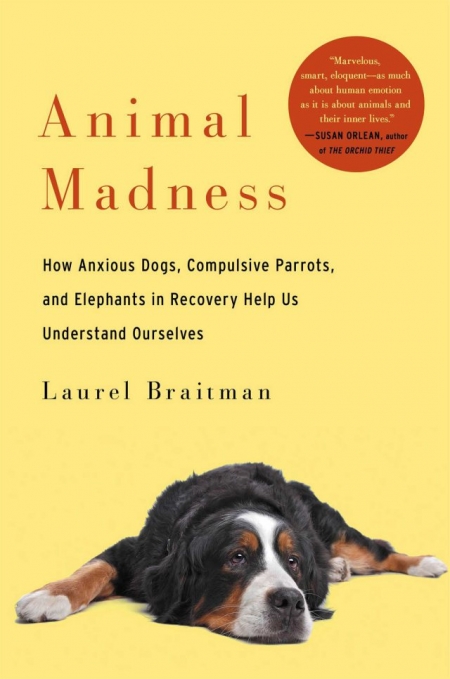 How Anxious Dogs, Compulsive Parrots, and Elephants in Recovery Help Us Understand Ourselves

“Science historian and senior TED fellow Braitman takes measure of the emotional thunderstorms that cramp or even curtail the normal lives of animals….There is much here that will remind readers of Jeffrey Moussaieff Masson—a gift for storytelling, strong observational talents, an easy familiarity with the background material and a warm level of empathy….Engaging….Sparks curiosity.”—Kirkus Reviews

“Illuminating….Braitman’s delightful balance of humor and poignancy brings each case to life….[Animal Madness’s]continuous dose of hope should prove medicinal for humans and animals alike.”

“This is a marvelous, smart, eloquent book—as much about human emotion as it is about animals and their inner lives.” — Susan Orlean, bestselling author of Rin Tin Tin, Saturday Night, and The Orchid Thief

“Braitman shows us sides of the animal mind few have imagined, and in doing so, opens our eyes anew.”

" Laurel Braitman deftly and elegantly makes the case that animals have complex emotional lives. This passionate, provocative, and insightful book deeply expands our knowledge and empathy for all species—especially, perhaps, our own.” — Barbara Natterson-Horowitz, M.D. and Kathryn Bowers, Co-authors: Zoobiquity: Astonishing Connections Between Human and Animal Health

"ANIMAL MADNESS is the sanest book I've read in a long time. Laurel Braitman irrefutably shows that animals think and feel, and experience the same emotions that we do. To deny this is crazy—which is why this fine book should be required reading for anyone who cares about healing the broken inner lives of both people and animals." — Sy Montgomery, author of Good Good Pig

“Braitman assembles the shattered pieces of others’ minds into a thoroughly considered and surprising realization that many familiar animals possess the same mental demons that haunt us. This insight challenges us to accept that our ancient kinship with other animals is as apparent in our psyche as it is in our physique.”  — John Marzluff, author of Gifts of the Crow

“Humane, insightful, and beautifully written, Animal Madness gives anthropomorphism a good name. Laurel Braitman’s modern and nuanced definition of the word helps animals, helps people, and bolsters the connection between the two. Her thought-provoking book illuminates just how much we share with the creatures around us.” —Vicki Constantine Croke, author of The Lady and the Panda

“Only a writer as earnestly curious as Laurel Braitman—so irrepressibly game to understand the animal mind—could draw this elegantly on both the findings of academic scientists and the observations of a used elephant salesman in Thailand; on the sorrows of a famous, captive grizzly bear in nineteenth-century San Francisco and the anxieties of her own dog. Animal Madness is a big-hearted and wildly intelligent book..” —Jon Mooallem,author of Wild Ones

“Researchers have long ignored animals in need, especially in the wild. However, just as we suffer from a wide variety of psychological disorders so too do other animals. But they make a remarkable recovery when they are cared for, understood, and loved.” —Marc Bekoff, author of Why Dogs Hump and Bees Get Depressed and editor of Ignoring Nature No More

Charles Darwin developed his evolutionary theories by looking at physical differences in Galapagos finches and fancy pigeons. Alfred Russell Wallace investigated a range of creatures in the Malay Archipelago. Laurel Braitman’s lessons started closer to home—by observing her pet’s odd behavior. When Braitman’s anxious but beloved Bernese Mountain dog Oliver jumped out of a third-story window in a fit of panic and nearly died, the germ of what would become Braitman’s life passion began: She would go to the ends of the earth to learn about emotionally disturbed animals and the ways they heal, often observing incredible parallels with human healing. In ANIMAL MADNESS: How Anxious Dogs, Compulsive Parrots, and Elephants in Recovery Help Us Understand Ourselves (S&S; June 10, 2014), Braitman shares the fascinating, inspiring stories she uncovered – and comes to the conclusion that humans and many other animals are astonishingly similar when it comes to mental illness and recovery.

Braitman’s dog Oliver was the poster canine for disturbing behavior: He snapped at flies that only he could see, ate inedible items like Ziploc bags and towels (well past puppy-dom), and licked and gnawed on himself compulsively. One afternoon, when left alone for only a few hours, Oliver chewed through a metal window screen and leapt from the third floor. He was badly injured but survived. Stunned and confused, Braitman set out to understand what was driving Oliver to such extremes, and if he could be helped. Ultimately she was unable to solve his but along the way she met with dozens of veterinarians, animal behaviorists, neuroscientists, and fellow pet owners; combed through the archives of our country’s oldest natural history museums; and traveled the globe to learn from other people’s unique experiences with animals, such as human psychotherapists with gorilla, bonobo and orangutan patients, and Mexican whale-watching guides who’ve witnessed the emotional recovery of once-violent California gray whales.  Through her research, Braitman discovered a form of continuity between humans and other animals that – first as a biology major and later as a PhD student at MIT – she’d never been taught in school. It turns out that many nonhuman animals, such as obsessive parrots, self-harming dolphins and anxious gorillas, can lose their minds – and when they do, it often looks a lot like human mental illness.

Thankfully, so many of us can heal. During her travels, Braitman heard dozens of moving recovery stories: parrots that learn how to stop plucking their feathers, dogs that cease licking their tails raw, polar bears that stop swimming in compulsive circles, and great apes that benefit from the help of human psychiatrists. How do these animals recover? The same way we do: with love, with medicine, with behavior therapy, and above all, with the knowledge that someone understands why we suffer and what can make us feel better.

With the ground-breaking authority and compassion of a Temple Grandin or Jane Goodall, Laurel Braitman takes us to a new frontier in thinking about animal psychology. ANIMAL MADNESS encourages us to understand and embrace the emotional life we share with animals – both in madness and in healing.

MIT PhD in the history of science, Laurel Braitman has written and performed live for Pop Up Magazine, The New Inquiry, Orion, and a variety of other publications. She is a TED Fellow and an affiliate artist at the Headlands Center for the Arts. Laurel lives on a houseboat in Sausalito, California, and can be reached at AnimalMadness.com. Follow her on twitter @LaurelBraitman.

More in this category: « Pressure Mounts To Protect Wildlife In Trade at Upcoming International Wildlife Meeting Zeb Hogan, From Nat Geo Wild's Monster Fish will join Jon and Talkin' Pets 7/12/14 at 5 PM EST to discuss the premiere of his show »
back to top