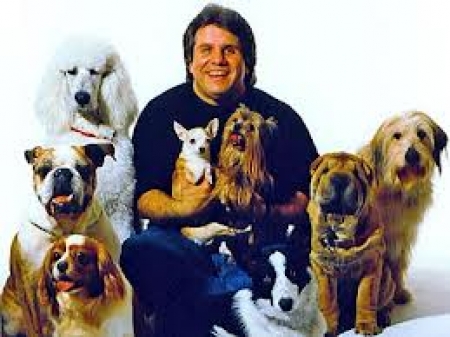 
From coast to coast, from celebrities to casting directors, from in front of the camera to behind the scenes, the "movers and shakers" in the industry know to contact BASH DIBRA, author, pet expert and celebrity trainer-to-the-stars, who is fast becoming the "PET LAUREATE OF OUR TIMES!" proclaims the prestigious Yearbook of Experts, the in-house industry "Bible" of the media.

Bash is an animal behaviorist, author of 6 best-selling books and a video on responsible pet ownership, training and the proper treatment of animals in both the pet and entertainment industry, and the soon-to-be-published "STARPET: How to Make Your Pet A Star." He sets the industry standard of service to celebrities and their pets, as well as any pet owner who comes to him for help.

Bash has appeared on numerous TV shows such as Inside Edition, The Tonight Show, Good Morning America, The Today Show, The Early Show and CNN, promoting responsible pet ownership. He works tirelessly for animal welfare, promoting animals in service to mankind, and is the recipient of numerous awards such as the New York State Humane Association Award, the New York City Veterinary Medical Association�s Unsung Hero Award, American Sociiety for Protection of Animals and the North Shore Animal League�s Legendary Bond Award.

At the age of three, Bash and his parents fled from their native country of Albania to Yugoslavia. They ended up in a refugee camp where Bash had his first introduction to the forerunner of dogs, the wolf. Used to guard the prisoners and supposedly frighten them, Bash soon out-foxed the wolves and had them eating out of his hands much to the chagrin of the prison guards. From that time on Bash knew what his life career would be � working with animals.

Bash�s own pets are celebrities in their own right, having been featured in motion pictures, tv commercials and ads.

Bash Dibra pet expert from Fieldston Pets  wants you to know..that pets are members of the family.... www.bashdibra.com


Bash Dibra is a dog trainer extraordinaire, and animal beharovist.  Here's some accolades from his fans.

"Bash Dibra leads us through various and very often complex parts of the human-canine relationship and shows us not only how it can work, but how we can make it work."
-Roger Caras, Past President, ASPCA

"Bash Dibra has such a cult following among Manhattan pet owners that he is known simply as Bash, like a rock star.... To clients like Alec Baldwin, he's 'top dog' among personal pet trainers."
-The New York Times

"High profile folks like Mariah Carey and Henry Kissinger rely on Bash, the trainer who can turn the most problematic pooch into a model canine."
-W

"Anyone who can teach Spike anything should be sainted."
-Joan Rivers

"I think Bash Dibra was raised by wolves."
-Nancy Friday

"Bash Dibra is recognized as an authority and deservedly so."
-William J. Kay, DVM, Past President, Animal Medical Center

"There's nobody quite like Bash when it comes to dogs! Within a few weeks my two Bichons were behaving perfectly and trotting happily on their leashes."
-Barbara Taylor Bradford

"Bash not only trains dogs, but truly loves them. And they love him too."
-Sarah Jessica Parker

"Bash did a great job in training Sally, our Border Collie, and in return, she absolutely adores him. That, to me, seems like the best endorsement of his training philosophy."
-Matthew Broderick

The Westminster Kennel Club will add to its incomparable legacy in the sport of dogs when it stages The Masters Agility Championship at Westminster on Saturday 8, 2014 at Pier 94 in New York City between the hours of 11AM and 10PM ..

Dogs and their handlers excitedly attack the obstacle course of jumps, tunnels, weave poles, and more in a timed competition in the fastest-growing dog sport in the country. The Mixed Breed category is especially significant, bringing non-purebred dogs to a Westminster event for the first time since the very earliest days of its show.

Canine Court, America���s first pet playground is the perfect place for the competing dogs and their handlers to practice prior to the Feb. 8th agility show. Located in Van Cortlandt Park in the Bronx, it is a living symbol of Fieldston Pets belief in giving back to the Community. America���s very first pet playground, is a green oasis of pastoral pet pastime that includes an agi lity course and a custom people/pet water fountain. Safely fenced in within Van Cortlandt���s rolling fields and forests, Canine Court has been the go-to destination for recreation socialization and pet-centric events and festivities since 1998.

The Friends of Canine Court and Bash Dibra are pleased to announce that Canine Court, located in Van Cortlandt Park, Riverdale,The Bronx, will be celebrating its 15th anniversary on April 14th, 2014. Since that time thousands of dogs have brought their owners to the 15,000 square foot fenced in playground to frolic on the obstacle/agility course with hurdles, hoops, see-saws, slides, tunnels, crawl spaces and self-contained "free play" area. And, they would be pleased to include the Westchester competing dogs and their handlers to this list.

Canine Court's celebrity status as the World's First Dog Playground has garnered world-wide attention, attracting visitors from all across the U.S. as well as the globe-inspiring many to follow in Canine Court's historic paw prints and to replicate both the playground and it's commitment to responsible pet ownership in their own communities.

With it's creator, Celebrity Pet Laureate and Dog Trainer-to-the-Stars, Bash Dibra, at the helm, Canine Court has provided New York City with a "paws on" fun-filled venue to promote responsible pet-ownership in conjunction with city-wide pet-related issues, events and charities that enhance the community and educate the importance and value of the human\companion-animal bond.

Canine Court���s 15th anniversary will be celebrated at the upcoming ���Fitness With Fido��� event at Canine Court in May. It is  is also in the process of being renovated and would welcome your donations. Bash Dibra invites dog handlers and their pets to come to Canine Court to attend this 15th year celebration.

We have created the ���Story of Canine Court.��� on YouTube that can be accessed at:

We have 364 guests and no members online