William Braden author of Henri, le Chat Noir will join Jon and Talkin' Pets Saturday 1/11/14 at 5 PM EST to discuss and give away his book Featured 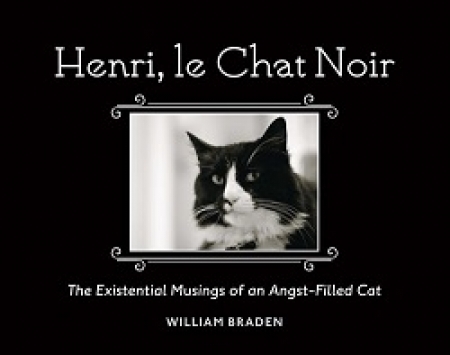 With furry viral video stars taking the Internet by storm, it’s no surprise that one of YouTube’s most popular pets is a French-speaking Tuxedo cat. But Henri, le Chat Noir isn’t your typical playful kitten charming viewers with mindless antics and common cuteness. In his own words, Henri is “filled with ennui”—trapped in a seemingly pointless existence and desperate to express his disillusionment.
Filmed in black and white to parody French film noir, Henri feels that his philosophical musings are not meant for idle entertainment. And yet, it seems the world is destined to take pleasure in his suffering. Henri’s videos have been viewed more than 12 million times to date, and his following is growing (almost as much as his disappointment).
Despite his distaste for simpleminded cats and misguided humans, Henri won the Golden Cat Award in 2012 (the top prize at the Internet Cat Video Film Festival in Minneapolis, Minnesota), and continues to be featured in the news, including being named one of Huffington Post’s Most Influential Cats of 2012. But, Henri wonders, what good is “influence” if one fails to be understood?
At first, Henri had been undeterred by these distractions, pondering instead life’s larger questions. “Ultimately, our lives are spent diverting ourselves with one meaningless task after another. And yet, the great mysteries of the universe remain undiscovered,” he says. “So, does it really matter if I peed on the counter?”
Such universal truths must be considered. But how can Henri address the narrowness of human understanding when his intellectual property is being compromised? His videos are widely credited as the mastermind work of William Braden (“the thieving Filmmaker”), a former student of the Seattle Film Institute who captured Henri’s malaise on film and has been living off his popularity ever since.
It’s time to set the record straight! Henri’s book offers his first uninterrupted, completely unedited commentary, which he hopes will provide new insight—or at least something for the coffee table that will make people look smart.
Henri, le Chat Noir shares the disenchanted house cat’s cynical, profoundly hilarious perspective alongside 45 artful photos and delightfully doleful quotes from the world’s first philosophical feline. Finally, the eye-opening truth is at hand for anyone who is willing to scratch well beyond the surface.
Publication Date: MAY 2013
WILLIAM BRADEN holds a degree in creative writing and attended the Seattle Film Institute. He is a professional videographer, but now supports himself fully with Henri-related ventures. He lives in Seattle, Washington, and is available for interviews.
Visit www.henrilechatnoir.com.
Henri, le Chat Noir
The Existential Musings of an Angst-Filled Cat
$12.99 hardcover, 96 pages, 7 x 5 inches
45 black-and-white photos
ISBN: 978-1-60774-510-5
eBook ISBN: 978-1-60774-511-2
TEN SPEED PRESS | Crown Publishing Group www.tenspeed.com
As a kitten, I was
filled with boundless
wonder and an endless
need to know more
about the world.
—
I soon discovered the true nature of our existence, and saw it for the cruel and arbitrary prison it is. Also, I grew into my ears.

More in this category: « Randolph County Urged to Reconsider Reversal on Gas Chamber Ban Dee Wallace, actress, writer, adviser and friend of Talkin' Pets will join Jon and the crew this Saturday 1/18/14 at 5 PM EST to discuss the 30th Anniversary of "CUJO", her upcoming book and much more »
back to top

We have 756 guests and no members online