Bugs Rule! Co-Author Richard Redak will join Jon and Talkin' Pets Saturday 9/21/13 at 5 PM EST to discuss and give away his book Featured 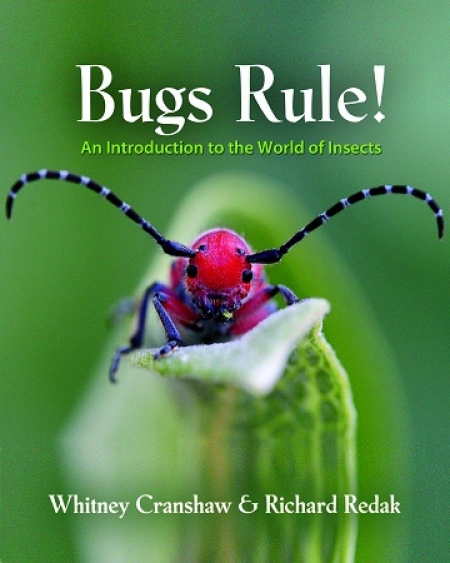 BUGS RULE!
An Introduction to the World of Insects


"Breadth classes dealing with insects have been extremely popular among science and nonscience majors for decades. The photographs, illustrations, little known facts, and sidebars in BUGS RULE! bring to life the fascinating world of insects. BUGS RULE! is an excellent text for the nonscience major and general nature enthusiast.”
—Michael K. Rust, University of California, Riverside

BUGS RULE!: An Introduction to the World of Insects (Pub date: September 25, 2013), by Whitney Cranshaw and Richard Redak, provides a lively introduction to the biology and natural history of insects and their noninsect cousins, such as spiders, scorpions, and centipedes. This richly illustrated textbook features more than 830 color photos, a concise overview of the basics of entomology, and numerous sidebars that highlight and explain key points. Detailed chapters cover each of the major insect groups, describing their physiology, behaviors, feeding habits, reproduction, human interactions, and more.
Ideal for nonscience majors and anyone seeking to learn more about insects and their arthropod relatives, BUGS RULE! offers a one-of-a-kind gateway into the world of these amazing creatures.
(more)
•    Places a greater emphasis on natural history than standard textbooks on the subject
•    Covers the biology and natural history of all the insect orders
•    Provides a thorough review of the noninsect arthropods, such as spiders, scorpions, centipedes, millipedes, and crustaceans
•    Features more than 830 color photos
•    Highlights the importance of insects and other arthropods, including their impact on human society
•    An online illustration package is available to professors
About the Authors:
Whitney Cranshaw is professor of entomology at Colorado State University. He is the author of Garden Insects of North America (Princeton). Richard Redak is professor of entomology at the University of California, Riverside. Both authors have years of experience teaching introductory entomology classes.


BUGS RULE!
An Introduction to the World of Insects

More in this category: « Oakland Zoo Supports San Francisco March for Elephants PLEASE HELP - Jeff Lucas and Christian Klimas, 2 very dear friends of Jon's and Talkin' Pets need your help in raising donations for the 165 mile bicycle ride to raise money in ending the pandemic of HIV/AIDS »
back to top