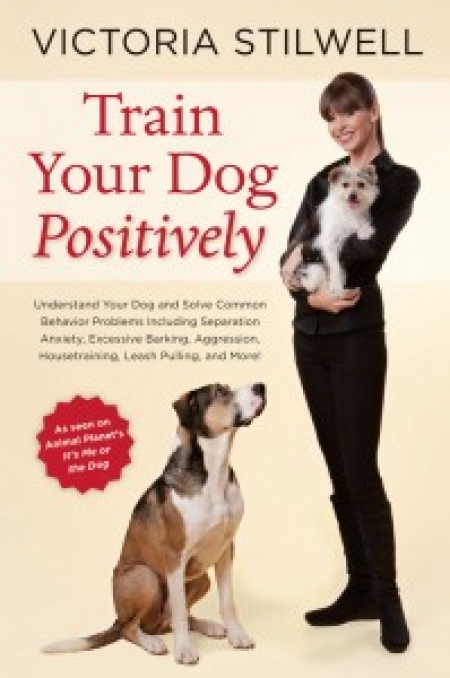 Victoria Stilwell is one of the world’s most recognized and respected dog trainers. As the host of Animal Planet’s hit television series It’s Me or the Dog (airing in 40 countries with 8 million viewers), she wins over audiences weekly with her Supernanny-like mannerisms and gentle, loving techniques. Now, millions of fans (and their canine friends) will delight in the fact that her guidance can be found in a new book.
In Train Your Dog Positively, Victoria explains how to use force-free, scientifically backed dog training methods to solve common canine behavior problems. For decades, animal training experts have incorrectly assumed that dogs misbehave to achieve dominance. This misconception has led trainers to rely heavily on the use of force in order to control and modify undesirable behavior by frightening or overpowering a dog into submission. But just as time-outs have proven more effective than spanking as a way to help children understand and achieve desired behaviors, so has training dogs with positive reinforcement become a recognized best practice over the once-popular dominance theory approach.
Modern behavioral science now shows that forceful handling practices—such as physical punishment, leash yanking, or making a dog submit by rolling it on its back—are psychologically damaging for the dog and have potentially dangerous consequences for owners. Today’s most effective dog training theories confirm that reinforcing good behavior with rewards (such as praise, food, or toys) while using constructive discipline (like time-outs or vocal sounds) is not only a more successful training tool, but a more humane way of communicating with canine companions. Positive training treats dogs with the same respect that we as humans ask of them, and also correctly identifies the root cause of the misbehavior (studies have shown that aggressive behaviors are often rooted in uncertainty and fear—not a play for dominance). Positive training brings security, security brings confidence, and a confident dog feels no need to exhibit anxiety-based behaviors.
Stilwell provides owners with everything they need to form a positive and rewarding connection with their dog—from understanding the human/canine relationship (the way dogs develop, how they learn, and how best to forge a bond) to numerous behavioral training solutions. With Train Your Dog Positively, owners have more than a handbook that teaches a dog to sit, stay, and come—they have a set of guiding principles that enriches their relationship with their canine companion, building trust and a lasting foundation for a happy, confident, and well-behaved dog.
On-Sale Date: APRIL 2013
Train Your Dog PPoossiittiivveellyy
Understand Your Dog and Solve Common Behavior Problems Including Separation Anxiety, Excessive Barking, Aggression, Housetraining, Leash Pulling, and More!
VICTORIA STILWELL
As seen on Animal Planet’s
It’s Me or the Dog
VICTORIA STILWELL was born and raised in Wimbledon, England, and has become one of the world’s most recognized and respected dog trainers. Best known for her role as the host of Animal Planet’s hit TV series It’s Me or the Dog, she has also served as a judge on CBS’s Greatest American Dog. She is involved with rescue groups around the world; is a regular columnist for The Bark, Dog World, American Dog, and Dogs Today magazines; and her popular Positively Podcast series is heard by listeners worldwide. Named 2009’s Dog Trainer of the Year at the Purina Pro Plan Dog Awards, Victoria is certified by Animal Behavior and Training Associates and is a proud member of the Association of Pet Dog Trainers. Stilwell lives with her husband, daughter, and chocolate Lab Sadie in Atlanta, Georgia, and is available for interviews. Visit positively.com.
Train Your Dog Positively: Understand Your Dog and Solve Common Behavior Problems Including Separation Anxiety, Excessive Barking, Aggression, Housetraining, Leash Pulling, and More! by Victoria Stilwell
$14.99 paper, 256 pages, 5 ½ " x 8 ¼ "
ISBN: 978-1-60774-414-6
eBook ISBN: 978-1-60774-415-3
TEN SPEED PRESS | Crown Publishing Group www.tenspeed.com

More in this category: « Elvis has left the building to make room for Tilman Dogs get far more veterinary care than other pets in U.S. »
back to top

We have 471 guests and no members online