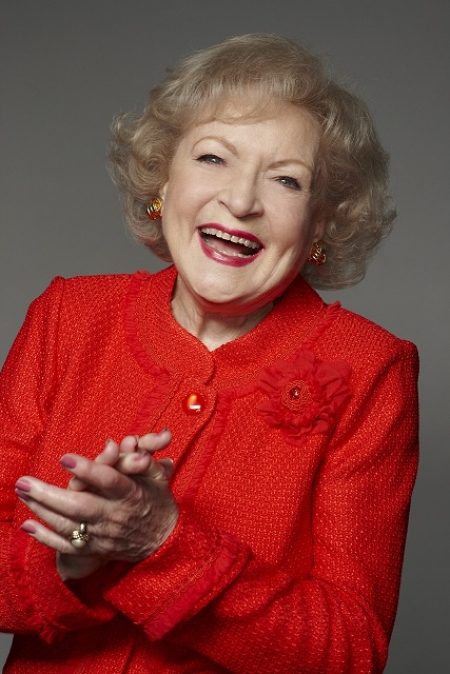 Although she turned 90 in January, 2012, it won’t slow down comedy legend Betty White, one of the
funniest and busiest actresses in Hollywood. With a career that has spanned more than 60 years, the
seven-time Emmy Award winner has created unforgettable roles in television and film, authored seven
books and won numerous awards, including those for her lifelong work for animal welfare.
White’s first comedy series, “Life with Elizabeth,” brought her first Emmy Award in 1952, followed by a
daily NBC talk/variety show called “The Betty White Show.” She was a recurring regular with over 70
appearances on “The Tonight Show with Jack Paar,” and appeared on “The Merv Griffin Show” and “The
Tonight Show with Johnny Carson.” She also subbed as host on all three talk shows. White was a regular
with Vicki Lawrence on “Mama’s Family,” as sister Ellen, a role she created with the rest of the company
on “The Carol Burnett Show.”
Her recurring role as “Happy Homemaker” Sue Ann Nivens in the classic series “The Mary Tyler Moore
Show” brought two Emmys for Best Supporting Actress in 1974-75 and 1975-76. She received her fourth
Emmy for Best Daytime Game Show Host for “Just Men.” Nominated seven times for Best Actress in a
Comedy Series for her role as Rose Nylund in “The Golden Girls,” White won the Emmy the first season
in 1985, and later appeared in the spin-off “The Golden Palace” for one season. She earned her next
Emmy Award as Best Guest Actress in a Comedy Series on “The John Larroquette Show.”
White was nominated for an Emmy in 2011 for her portrayal of “Elka,” the snarky but lovable caretaker
on the TV Land series “Hot in Cleveland,” in which she stars alongside Valerie Bertinelli, Jane Leeves
and Wendie Malick. Betty also won back-to-back Screen Actors Guild Awards for Outstanding
Performance by a Female in a Comedy Series in 2011 and 2012.
When she hosted NBC’s “Saturday Night Live” in 2010, it was one of the highest-rated episodes in the
show’s history, and earned her an Emmy Award for Guest Actress in a Comedy Series, bringing White’s
Emmy total to seven awards. Betty is also Executive Producer and Host of the NBC series Off Their
Rockers, currently airing on NBC and she has been nominated for a 2012 Emmy Award for Outstanding
Host For A Reality or Reality Competition Program.
In addition to charming sports fan with her role in the popular Snickers commercial shown during the
2010 Super Bowl, White has guest-starred on “Ally McBeal,” “That ‘70s Show,” “Boston Legal,” and
received Emmy nominations for guesting on both NBC’s “Community” and “The Middle.” She was also
nominated for an Emmy as a guest actress on “Suddenly Susan.”
Her numerous television movies include “Chance of a Lifetime,” “Stealing Christmas,” “Annie’s Point”
and “The Lost Valentine,” for which she received yet another Emmy nomination. Betty also hosted the
New Year’s Day Tournament of Roses Parade for 20 years, and the Macy’s Thanksgiving Day Parade for
10 years. Her big-screen credits include the Warner Brothers hit “The Proposal,” with Sandra Bullock and
Ryan Reynolds, as well as “You Again,” “Bringing Down the House,” “The Story of Us,” “Lake Placid”
and “Hard Rain.”
The most recent of her seven books include “If You Ask Me (And of Course You Won’t”), released in
May, 2011 which earned Betty a Grammy Award. “Betty & Friends: My Life at the Zoo,” was released in
November, 2011. Betty has also been named the world’s Most Trusted Celebrity according Reuters for
back to back years.
White’s awards are numerous, and include the Career Achievement Award in 2009 from the Television
Critics Association, a Lifetime Achievement Award by the Jane Goodall Institute in 2009, the Screen
Actors Guild Life Achievement Award in 2010, and a Lifetime Achievement Award in Acting in 2010
from the American Women in Radio and Television. She was voted AP Entertainer of the Year in 2010,
and was given the Lifetime Achievement Award in addition to being inducted into the Broadcasting and
Cable Hall of Fame in 2011.
A passionate supporter of animal health & welfare, White was recently named Chairman of the Greater
Los Angeles Zoo Association, has served on the board since 1974 and as a Zoo Commissioner for eight
years. In 2006, White was honored by the City of Los Angeles at the Los Angeles Zoo as “Ambassador to
the Animals” for her lifelong work for animal welfare. Betty also serves as President Emeritus of Morris
Animal Foundation and has been a trustee since 1971.
She was married for eighteen years to Allen Ludden, host of the game show “Password,” until his death in
1981. Betty lives in Brentwood, California with her golden retriever, Pontiac.

More in this category: « Brian Collier, TropiClean Creative Marketing & Public Relations Coordinator will be joining Jon and Talkin' Pets this Saturday at 6:30 PM EST to discuss and give away some of their TropiClean products for pets April is National Adopt- a-Greyhound Month »
back to top

We have 518 guests and no members online